Description: Came to New Zealand with the ‘Daly’ Gum Diggers, and is a nutritional ‘superfood’ used as a leaf cabbage. Can be picked Winter and Spring. Pick from the bottom up.

Once widespread around the North (especially around the Marae and areas of strong Dalmatian heritage). These cabbages need to be planted in time to have them fully grown by the time it gets cold. They are used as leaf cabbages and are picked throughout the winter and spring (until October, when they head up to seed). Traditional Dalmatian recipes used these leaves for stuffing with mince and beans dishes and then baking. Dalmatian cabbage is one of the few varieties which are easy to save seed from in the North, and this cabbage is known around the world as being one of the most nutritious brassicas. Probably because it is an open leaf variety so all leaves are in the sun. Collards are known in Africa as Ethiopian cabbage, and this vegetable travelled with the slaves to America and became one of their most important critical vegetables. It is still eaten daily by people of African descent in the Southern states and is regarded as essential ‘soul food’. 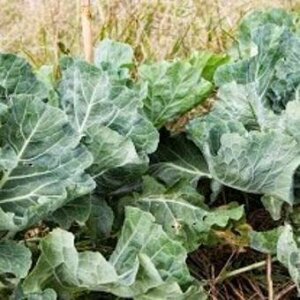