Description: Climber, green, shellout, dry beans. We’ve been sent these beans from all over the country; they were obviously once widely grown. They are eaten both as a green bean, when they look like a pea pod with small peas inside, and a drying bean but the white seed is round like a pea, I guess that is why they’re called Pea Beans! It was obviously widespread in the South Island we’ve been sent beans from many people down there but the first was Margaret Harmon of Bexley Christchurch. Another of our members who sent us the seed years ago, Valma McIlvride of Orakei says. “They taste like a cross between a pea and a bean, no strings, eat whole like a bean, steam quickly about 2 minutes and if they open they are overcooked. When over cooked they go mushy”. They are vigorous climbers and take a long time to flower but give huge crops of beans over many months. They are an old Dalmatian bean. The white round seeds are great in all dried bean dishes as well, particularly baked beans! They need a long growing season to do well, plant early harvest last.

Planting Instructions: Scatter sow into seed trays and transplant as soon as second leaves appear at 10 cm spacing under trellis . This avoids problems with birds, slugs, snails, and rotting in cold ground. 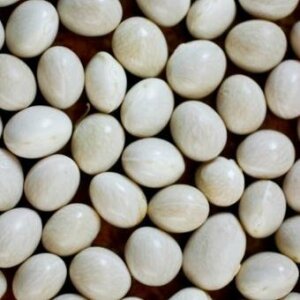