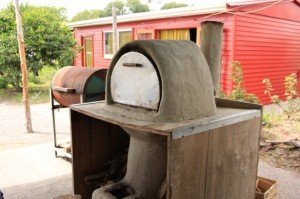 Some may remember I did an article a while ago on white ovens. If you haven’t read that, now might be a good time as this article follows on from it. Those that did read the article may remember I foolishly made a prediction on how hot I thought the oven I proposed to design and build would get. The magic number was 300degC, as the oven would at times be used for cooking pizza and also large amounts of food for catering purposes.

So lets go through the building and testing process and see how it all went. One of my main design parameters (apart from the hoping it would work) was that the oven could be built using fairly simple tools and without much engineering skill -so no welding at all in the construction. A much modified 200L barrel forms the heart of the oven. These are easy to come by and if you follow a few simple steps are easy to open up and clean.

Car workshops are a good place to get the barrels, as they will usually only have had clean oil in them. I then usually tip them upside down over a container and let them drain for 1/2 an hour and then give them a couple of washes with hot water and dishwashing liquid. Whatever you do, don’t use a drum unless you are absolutely certain you know what was in it prior. I once was invited to give an oven workshop and when I turned up all the barrels  that had been collected were ex-herbicide and pesticide barrels. Big no no!

The next thing to do is remove the ends. For this you only need a small angle grinder. Firstly use all the appropriate safety gear when using any power tools (You have been warned!). Simply grind evenly all the way round on the very end of the barrel and eventually you will see a line appear, stop grinding on this spot and move along till the line continues all the way round the drum. Then just tap around on the inside of the end of the drum with a mallet and the end should fall into the barrel where it can be retrieved. If the end is a bit stuck then note where its not moving down and give it a bit more of a grind. Do this with  both ends and save them. Next put one of those thin steel cutting blades on the angle grinder (I love those things, they are so handy) and cut the drum in half so you basically have two round steel tubes. Each will have a thick lip on one end that corresponds with the top and bottom of the barrel.
Next take one of your steel tubes and fit what was originally the lid of the drum into the end without the thick lip and drill and pop rivet it in place. It should be a neat fit. Oh, by the way, the lid of the drum will usually have two screw-in bungs, one big, one small,  remove these and take the black “O” rings off and refit the bungs. This way when the oven heats up you won’t be getting smoked out from melting “O” rings.

You now should have a half height barrel. 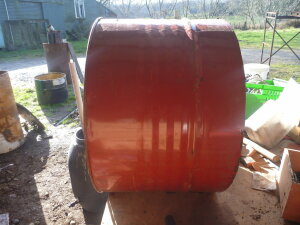 Next take what was the bottom of the barrel and cut it as shown in the photo, add two hinges and pop rivet the smaller piece into the end of the barrel. You now have your inner cooking chamber with door. 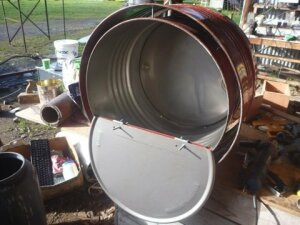 We then take the remaining steel “tube” and cut it vertically from top to bottom and stretch this and place it around the inner chamber. A picture is worth a thousand words so have a close look at the next  couple of photos and you will see that I have drilled through both the outer and inner chambers and installed bolts and nuts in three places on each end so that the outer cover is held in place and a gap of approx 50mm is maintained between the two steel tubes. This is where our hot gasses will flow. 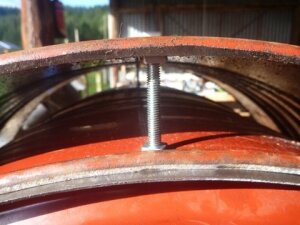 Next step is to make a base. In this case a heavy but cheap plywood bench was made and a hole cut to take the oven assembly. 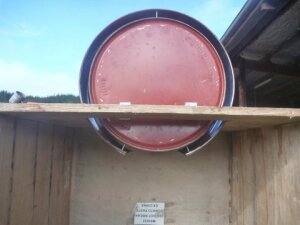 Being in NZ we have heaps of pumice lying round everywhere so I filed some pieces flat and used them to space the barrels away from the ply so that the base was well insulated from the oven. 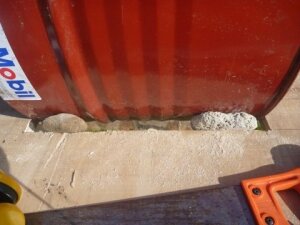 We had some insulation batts made from recycled glass left over from another project so we used this to insulate the outer steel tube. You could use some perlite mixed with clay or even a clay sawdust mix as an insulating layer but we had the batts handy and they make a very big difference to the performance of the oven. Over this we put an outer cover of some thin aluminum sheet and pushed cob into the gap. Again we had the sheets lying around but you could use the skin of another barrel. Note that the extra metal layer is to stop the outer cob layer squashing the insulation flat. If you use the perlite or sawdust mix mentioned earlier the you don’t need the metal layer just cob straight over the top.

In this shot you can see the cob being pushed into the gap in the insulating layer. 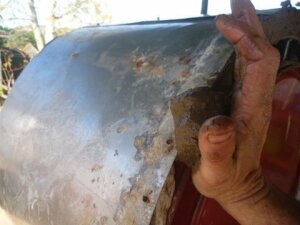 This shot is from the back of the oven and you can see I have also plugged the gap between the inner barrel and the outer barrel leaving an exit hole for the exhaust gasses at the top. 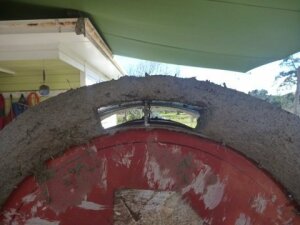 A shot from the front showing the gaps between all layers filled. 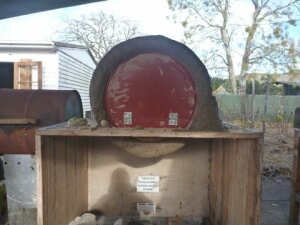 Here we see the combustion gas inlet from below. It’s just a hole cut in the outermost skin of the insulating layer. You can see the inner barrel through the hole. 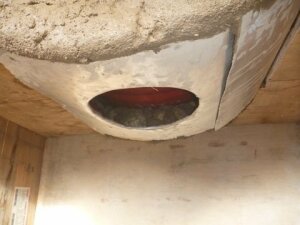 I then built an insulated heat riser for the rocket stove using crushed pumice rammed down between two different sized flue pipes and capped in place with cob. Next I cut slots in the ends of the outer flue and bent the tabs over to lock everything permanently in place. 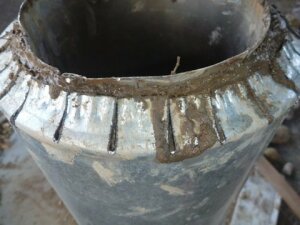 I then built up a rocket stove body out of old bricks. 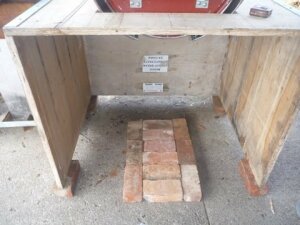 I wanted to have a test run with and without baffels to measure what effect having baffles in the outer chamber would make to the oven performance. So without cobing in anymore of the exterior we fired up the oven and took some temperature readings.  Fifteen minutes after lighting the oven with no baffles installed it hit  217degC and in the next 15 minutes went up to around 265degC and stabilised there.  Pretty good for a first run.

The next day we removed the cob mix from the rear of the oven where it seals between the inner and outer barrels. Baffles were made from some of the scrap fiberglass insulation wrapped in aluminum foil and then inserted into the gap between the barrels so that the combustion gasses had to follow a convoluted path to get out, hopefully giving up more heat to the inner barrel in the process. 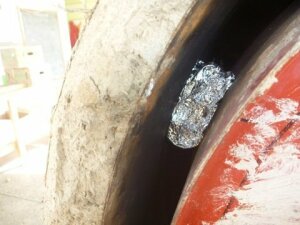 We then reassembled everything and fired her up again.

It’s here that I have to digress a little and set the scene. I had been working with the Koanga Institute on site for nearly a year and the day in question was to be my last full day, I was due to fly out very early the next day. As you can imagine things were pretty hectic. Cleverly a week earlier Kay had said we were going to have a pizza night for my sendoff so guess what? First I had to make the oven! So there we are at 4pm in the afternoon and we haven’t hit our target of 300degC and we’re supposed to be cooking with the oven in a couple of hours. Anyway in the first 15 minutes we passed 265degC and in the next 15  we passed 400degC. The highest temperature later in the night with all the cooking done reached over 500degC. To say I was stoked would be an understatement. Of course there are lots of things I could have done better, as it was a bit of a rushed job.

On my return to teach at the institute’s next PDC some six months later the oven has had some major improvements, most notably a new experimental coat of paperdobe (paper and silt/clay) and some improvements to the baffles which were found to have slipped. Brad who did the work had found that the old baffles had slipped down, probably from heat distortion and so had constructed permanent steel ones instead. The modifications make the oven much more durable and the Paperdobe is proving to be quite a good insulating outer layer. 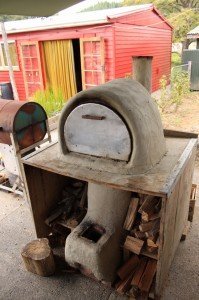 All in all the oven is proving very fuel efficient and easy to use and is in near daily use at the institute cooking up lots of yummy food.

Tim is a qualified diesel fitter who has been learning and experimenting with permaculture for over 30 years. He has tutored at both the Koanga Institute in New Zealand and the Permaculture Research Institute in Australia. Over the years he has run a farm, environmental adventure tourism businesses, and contracted for the Environmental Protection Agency on large projects, all the while continuing to create his own projects from a hovercraft to a home aquaponics system. His current big project is designing and building a rammed earth home for his family in Morten Bay.