Up here in the Hokianga we don’t have really cold temperatures to deal with (in fact we really only had one frost this winter and that was back in early June). Now the weather is really changeable – hot and sunny enough some days for us to be removing clothing layers and feeling like we should be getting our sun hats on, very wet some days and some quite cold nights. Even though its relatively mild some things still need a help to get away early and I have a different system for starting seeds than Kay. We have a hooped tunnel house that we never got round to putting the ends on – once the tunnel house was up and functional the ends dropped off our ‘to do’ list. It provides shelter and some warmth but not enough to get some things started early in the season. Inside the tunnel house I had John build a hot box. Its made of macrocarpa and is about 1.2 by 1m and about 50 cms deep. Its up off the floor on legs and has a wooden base. Resting on the base and angled forwards is a piece of roofing tin – I’ll explain its purpose in a moment. In late July we collect horse manure and John scythes some grass and we build up layers in the hot box – manure, grass, manure, grass and then potting mix on top. I cover the whole thing with plastic using two cloche hoops pushed into the organic material in the box. The plastic I’ve been using for the past 5 years had finally shredded this year so I got a new piece – a recycled plastic wrapping from a double mattress from a local furniture store. Its a perfect size, cost me $2 and I kept it doubled for extra heat. 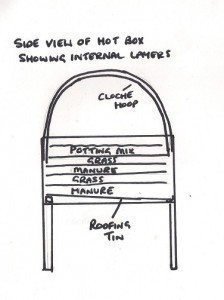 The way it works is simple – the manure and grass clippings start to compost down and in doing so produce heat from underneath and the plastic cover keeps that heat in – even first thing in the morning the air under the cover is appreciably warmer than outside it.

Its a great place to start seedlings off – some things, such as Jimmy Nardello peppers, that really benefit from the direct bottom heat are sown straight into the potting mix while others that are easier to germinate (e.g. Red Kuri pumpkins) are sown in seed trays that are just placed inside the hot box. Once the seeds are sown they need occasional watering. Any surplus water filters down through the layers, flows along the roofing tin into a piece of guttering which directs it to a pipe which exits the box vertically. I keep a bucket under that which collects the nutrient rich water for use as a liquid feed. 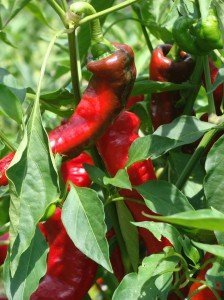 I’m really pleased with it as a system. It gets the seeds germinating early and up here I only really need it for August and September, by October everything germinates just fine in the tunnel house. So for the rest of the year I use it for growing root ginger – its perfect for that. I’ve found that the ginger for planting stores best in trays in potting mix in the tunnel house as then it doesn’t dry out too much. Once the hot box is no longer needed for seeds I plant the ginger into the box, without the plastic cover as it doesn’t need that. The ginger needs the warmth provided by the tunnel house and the nutrient rich matter in the box is perfect. It requires quite a bit of watering so the nutrient recycling by catching the water is great. The other thing ginger needs is to not be in intense sunlight – our tunnel house plastic is partially UV protected and gives some shade so it thrives in there. Its harvested in the winter when the foliage dies down – perfect timing to get the hot box ready for the seeds again.

Spring in the Garden

I had a walk through the garden earlier today – it felt very spring like and there were bees everywhere. The Sutton’s Dwarf Broad Beans that we grow are flowering away and look fantastic. In some parts of New Zealand it’s better to sow Broad Beans now but up here I’ve found it’s too late so sow mine in April or May. That means they’ll form beans before the weather gets too hot and gives me the added advantage of them finishing early so I can plant something else over the summer as I’m always running out of space. 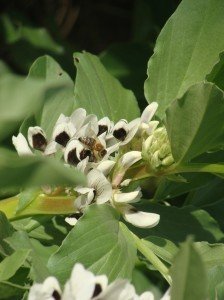 We’re coming into a really busy time now and I like to get some things started quickly to get ahead for later in the season. We grow Jimmy Nardello peppers and like to get them producing as early in the season as possible so start them off in the hot box. They are beautiful, elongated red sweet peppers that visitors usually mistake for chilli peppers because of their shape and colour. Once they are producing we eat them most days in a variety of ways but I think they are best just roasted. Up here in the north we have the added bonus of a prolonged season and they don’t stop producing until late June or into July.

Our tomatoes are also sown in the hot box to get them away early – we like to grow a range of colours and shapes. One of our regulars is Alma a red, egg shaped tomato that is very disease resistant and great for eating, cooking or drying. In fact a big treat this winter was the discovery of 3 jars of dried Almas stored in olive oil that had been forgotten at the back of a cupboard. They were from 2011 but were perfect and are delicious with our home made cheese. We also grow J Walsh Yellow good for eating fresh or cooking, Oxheart which we mainly use for cooking and Broad Ripple Yellow Currant which is great in handfuls in salad and always a favourite with children (and adults!) to browse in the garden. Eggplants grow really well up here and again its good to get them going early so I start them in the hot box too. We’ve tried several varieties and love them all so grow a different one each year. We grew Tsakoniki last year which were great. They have stripey red/violet skin and non-bitter flesh but we also like Florence Round Purple which are very dark skinned and look and taste amazing.

We’re still eating lots of salads up here in late winter / early spring mainly comprised of Rocket which overwinters easily here, American Land Cress, Sorrel, Endive Indiva Scarola, Raddiccio Rosso, Nasturtium leaves and flowers, and Calendula Flowers. We’ve also got lots of Chioggia and Bull’s Blood Beetroot that overwintered nicely and Tokinashi Daikon radish. They are great in a root salad along with Yacon which is part of our back order collection. Yacon is a perennial root vegetable that has small sunflower like flowers in the summer. The tubers are harvested in the winter and provide a sweet, crunchy addition to salads. We usually harvest some wild greens such as bitter cress, plantain, dandelion and puha to add to the salad and have that with homemade cheese for lunch each day. I sowed lettuce in the hot box in August to get some away early and it germinated pretty much straight away so that’s pricked out in trays already. We like to grow a mix of different lettuces (Four Seasons, Odells, Devil’s Ear) – the different shapes and colours look great and add interest to spring and summer salads.

The hot box will really start to fill up at the end of August. We grow Long Green Bush Marrow successionally over the season and the first ones will be sown after the new moon. We really like this variety as it produces great tasting courgettes but also very tasty marrows if you let them grow large. I think marrows are a very underrated vegetable. These ones have great flavour and are good for stuffing (often with our Four Seasons Quinoa). They even keep quite well and we still have a few on the pumpkin store that look perfect even now. We will sow our Red Kuri pumpkins at the same time as the marrows. These are a fantastic summer squash and are usually ready to eat by late December. They are very productive and great roasted, steamed or as soup and can be eaten skin and all. We sow our other pumpkin a month later and that won’t need the hot box. We grow Cupola, a beautiful large butternut that is a great keeper. The combination of the two pumpkins is great – we usually still have Cupola left in late December when the Red Kuri start and then by the time the Red Kuri finish around May we can start eating Cupola again.

We grow several kinds of beans each year and like to get some started early. I successionally sow a bean called Sinton throughout the season and start the first ones off in September. Sinton is a bush bean and great eaten either as a green bean or a drying bean. I usually do 3 sowings, the early ones will be eaten as green beans for a while and the plants left to produce beans for drying, the middle sowing will be just for drying as by the time they are producing we usually have lots of a climbing green bean called Blue Lake to eat, the final sowing will be mainly eaten as green beans (the Blue Lake have usually finished by then) and if the weather stays dry enough then a final harvest of drying Sintons.