Some may have read my earlier articles on constructing simple efficient wood fired ovens and water heaters. To date the ovens i have described are what are commonly known as “Black” ovens , now the mental image that  the description “black oven” conjures up may not be particularly appealing but the reality is i assure you far from it. Basically a black oven is one where the food being cooked is exposed to the combustion gasses of the wood so technically a wood fired pizza oven is considered a black oven. Now most i’m sure will agree that a good wood fired pizza is a beautiful thing. Having almost exclusively used a black oven these last three years for all my families roasting and baking i can attest to how tasty food from one of these ovens can be.

There are a number of broad differences between white and black ovens and i’m going to generalize here so professional pyromaniacs and oven builders please remain calm. Generally black ovens are stored heat ovens ,that is you burn wood in them and the mass of the oven stores the heat of the fire. You then clean the ash out and put your food in, be it pizza, roast or bread (again i’m glossing over a vast body of information here) and it cooks, all the while slowly losing heat. Now we’ve all seen wood fired pizza ovens where there is a fire going in the chamber. This is merely an adaption to the need in a commercial situation to cook for extended times or for ovens without adequate mass to store enough heat in the first place. Where my black ovens differ is that there is no attempt to store heat. You cook while the fire is burning with little or no need for preheating.

Funnily enough though one of the most commonly asked questions is “doesn’t the smoke taint the food “ well to be honest i like the flavor it imparts to the food but by and large if the oven is well designed and tended then there is very little “added” flavor.

As i mentioned earlier we bake in ours, cakes, scones, biscuits lots of things with delicate flavors that wouldn’t benefit from a smoky flavor. You’ll notice i added the caveat “if well designed and tended”.  If its not well designed and smokes then it will taint the food ,ditto for wet or green wood or of particular horror if the wood is treated or painted. This cannot be overstated  Use Only Untreated Wood. And of course some people simple don’t know how to start or tend a fire (i would hazard to say most) so if the fire is poorly tended again it will smoke.

Now if your with me on this you’ve probably already guessed there is such a thing as a white oven and yes a white oven simply keeps the food and the combustion gasses separated. Now compared to the black ovens i’ve designed using old electric or gas ovens the white oven is a slightly more complex beast to construct. Firstly we have to have a gas tight inner chamber where the food cooks, this is then surrounded by a chamber where combustion gasses flow and heat the inner chamber through conduction, convection and radiation. In the interests of efficiency we also can have an outer insulating layer to trap and make better use of our heat.

Guess what ? White ovens fall into two main categories with a third sub category. Those that cook with stored heat, those that cook with direct heat, and those that do a little of both. Now when i talk about mass ovens and insulated ovens i don’t mean that mass ovens have no insulation, in fact the best most efficient ones do. However the insulation goes outside the mass and keeps the captured heat from escaping to the environment thereby staying hotter longer. By contrast an insulated oven has comparatively little mass and uses the heat of combustion as its produced.

White ovens that use mass to cook use ….well a lot of mass ! This can make them quite an undertaking to construct and because of the long preheat time removes a lot of the spontaneity that is the spice of life. As previously argued http://permaculturenews.org/2012/11/23/so-where-does-the-appropriate-in-appropriate-technology-come-from/ they are also very inefficient when used in the wrong context. So setting this type aside for a future date i want to concentrate on low mass insulated ovens.

But first a quick look at our sub category of mixed white ovens (some mass and ongoing heat).

Mixed white ovens have been around for some time and seem to often incorporate 200l barrels (44 gallon in old speak and 55 gallon if your from the US). I think that this is purely because they lend themselves so well to the concept and are cheap and easy to get. 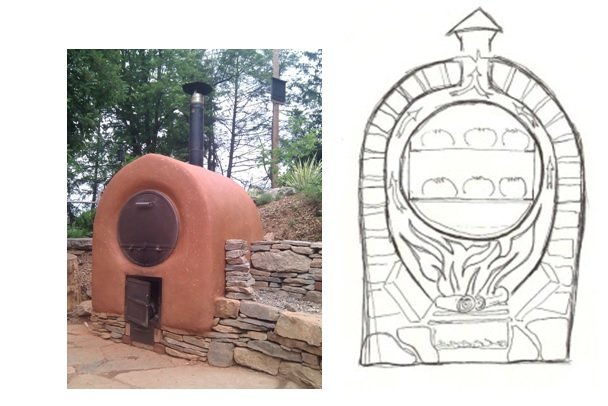 Above we see a more recent design by Max and Eva Edleson of www.firespeaking.com adapted from similar ovens they saw in South America which use some mass and ongoing heat.

Interestingly enough the ovens don’t appear to use any insulation as such and so must lose a fair amount of heat to the environment. However because of the slow heat transfer rate of the Adobe bricks around the barrel  and the large fire chamber, more than enough is soaking into the barrel. Also of interest is that the fire is a traditional sort in that logs are piled in, a fire lit and off you go. As a person who has spent a fair amount of time over the last few years mucking about with rocket stoves the design cries out for a big dose of efficiency in the shape of a rocket combustion chamber, less mass and better insulation. 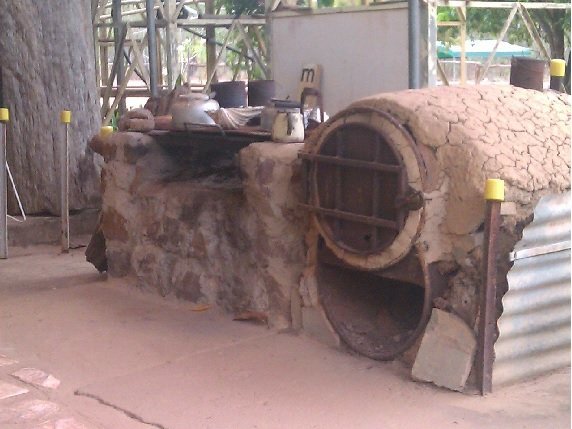 This Photo is of one of the oldest barrel ovens i know it dates from the 1940’s and is at Moreton Telegraph station in Far North Queensland Australia. Note the similarities to the much later design above. These were know as Ant bed ovens as they utilized the material from termite mounds broken up and mixed with water to form the outer shell. You can clearly see a layer of ant bed (think cob) packed in between the inner and outer drum to create a space for the hot combustion gasses to flow around. It was probably this oven that really sparked my initial interest in wood combustion back in the mid 90’s.

This leads us by a long and tortured path to the brief for my latest design which is a white oven with as little mass as possible using a rocket stove as the heat source. Combining these two features should i hope produce an oven that is very quick to heat up and is very frugal in its use of wood. Its always a mistake to pre-empt a design but i’m guessing this oven should hit 300 deg c (great for Pizza) on very little wood. Stay tuned.

It’s that time of the year again…. This week I’ll be planting my early spring garden, and I’ll be planning my Summer garden.

My focus as always will be on finding as many ways as possible to maximize potential for growing nutrient dense food. That means a focus on soil health and a focus on choosing the strongest genetics, or the cultivars that contain the highest levels of nutrition. This month my focus is on choosing those cultivars I’m going to plant. I’ve been doing that now for 30 or so years and I find that I’ve developed very strong relationships with some of the vegetables in my garden. Some times that relationship feels so strong that those plants are now part of the family and I’ll probably always grow them. It actually feels as though my DNA recognizes them, and celebrates the nutrition they provide.

Others I still getting a feel for, and as I learn more about some of the cultivars in our collection, or as new knowledge or understandings come my way I rethink old choices and sometimes make new ones.

The longer I do this the more strongly I feel that the job now is to focus on nutrient density through both genetics and environment.

I love the way Jo Robinson explains .. in Eating on the Wild Side….the human tendency to choose sweet high carb fruit ad vegetables, the reason we’ve selected over thousands of years for these qualities rather than nutrition, and that challenges me to rethink my choices all the way through my menu.

She says in Eating on the Wild Side that as hunter gathers we were hard wired to spend our time searching for the food that made us feel good and kept us healthy, ie that food that was the sweetest, had the most amount of fat and the highest levels of carbs. When all of those things were hard to come by and when they did in small amounts that worked for us. After 10,000 years of plant selection for those qualities it no longer serves us to be constantly eating the sweetest and the fattest and the highest in carbs, we need minerals and vitamins and traditional fats

I’ve definately had a very big sugar addiction through out most of my life, and, and have largely succeeded in changing that . Following the principles of the Weston price Foundation which are the principles all indigenous people based their diets on made the big difference but choosing fruit and vegetable cultivars that contain higher levels of bioavailable nutrients helps a lot as well.

This season for my early Spring garden, I’m going to choose to plant more open leafy greens, (rather than hearting greens) that have a deep green colour or even better a lot of red or purple colouring. They simply contain many times levels of phytonutrients  compared to pale coloured cultivars with tight hearts.

These  will be my early salad ‘greens’

I’ll plant Ohno Scarlett turnips because of their strong growth habit and deep red veined leaves which are delicious as well as the thick but tender  red skinned turnips. These are a favourite ferment , and the red colouring colours the whole jar of pickles.

I’ll plant my favourite daikon, Aomaru Koshun, which have deep red mandalas in their centres, and I’ll plant Red Russian Kale and Dalmatian cabbage and De Cicco broccoli, for my Spring brassicas because they are also open hearted containing many times the nutrition of tightly hearing cabbages etc. Dalmatian cabbage aka Collards are just as nutritious as kale, and are our own NZ heritage vegetables. Cylindrical beetroot is my favourite not only because of the dark red colour but also because it is twice as productive as other cultivars.

I’m also chitting my potatoes ready for planting now and I’ll be planting Urenika and Whataroa, the two that feel the most nutrient dense to me. Certainly Urenika is well proven to have super high levels of anti-oxidents and bio available nutrients and Whataroa  feels way higher than most others as well.

In my next blog I’ll talk about my choices for the most nutritious Summer crops …. Happy Spring!